tldr: Most of my art is rooted in performance, subverting genres like stand-up, dance, aristotelian drama, performance art (or art-in-action) + experimenting with mediums like painting, collage, electronic music composition, video/photography, often working with (not for) an audience.

I take what I'm talking to *myself* about and figure out the most effective/efficient, funny way to share it. I'd rather make the performance of doing [attempting] something the thing, than perfectly executing the standard of the medium. I like to show that expression isn't that difficult, and feels good. It's all about people in a room, more or less. Performance enables bravery in regard to failure. We're in something together. I believe the forums in which I express myself are manifestations of the world I want to live in. By the time I started college I thought that the pinnacle of my expression would be writing scripts, to be staged in theatres — and I've found myself much more free to think of scripts/plays —> performance as one setting among many I can execute an idea as. Why not just paint the feeling I'm trying to share with others?

I love the John Baldessari idea of wrong. I can free myself to express in different mediums by subverting and disregarding my preconceived notions of how I'm supposed to make dance, paintings, or anything. Doing something wrong can also be hysterical.

For a deep look into my tastes, open up this public Evernote notebook where I store all my fragments of inspiration.

an artistic statement written during college

I’m drawn to making a lot of different things. I act. I write computer code. I paint. I'm trying to make sculptures like Bob Rauschenberg...I compile monthly analytic data. I dance. I am always learning and trying a great deal of things. Some things I'm quite skilled at; other things I do because I enjoy the trying e.g. playing the piano — I don't know any chords, but I know which notes are which, which is enough to improvise and have fun. I’m trying to manifest the future I want to see in the world: less pain and lonliness because of one’s insecurities, more resources and knowledge for people who historically haven't had any. Making art is a good way for me to activate people's empathy and form a community around an experience. My work as a producer, dramaturg, administrator, Wikipedia-article writer comes from the same impulse. When I make art I am thinking about how to craft:

I've found that I'm constantly changing my mind about who I am. I often have revelations about myself, then forget them...then rediscover something or remember another thing. 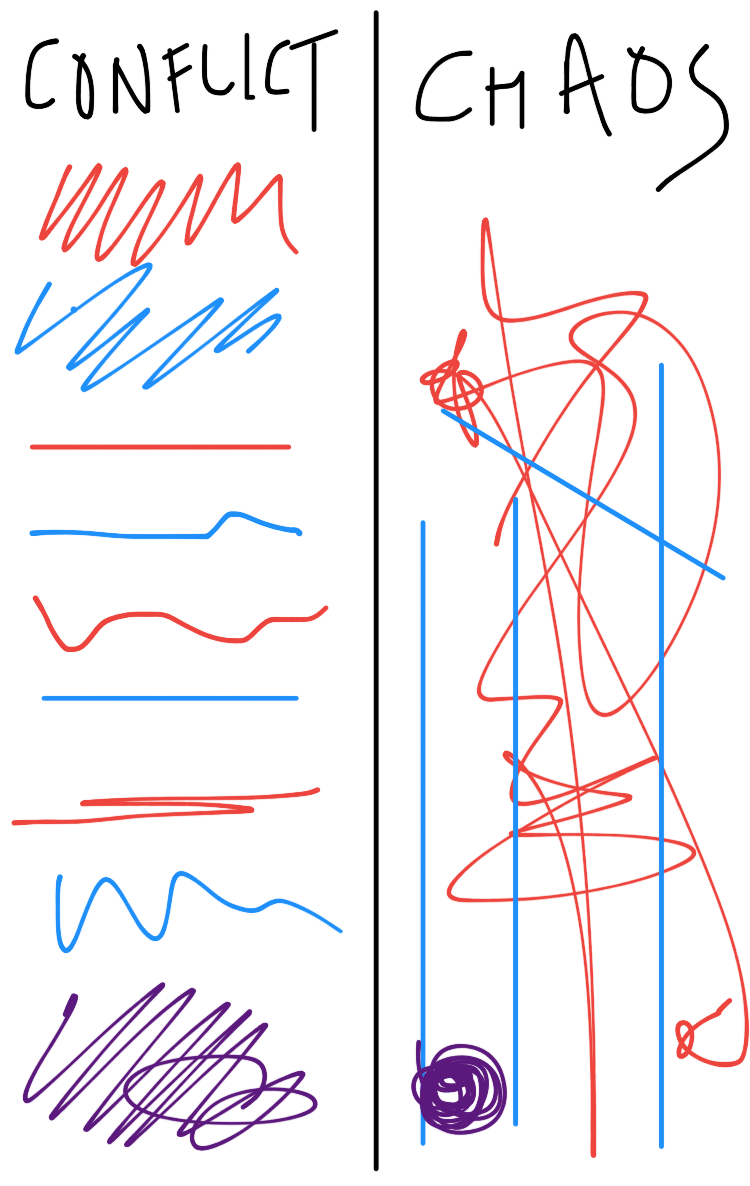 Theatre director JoAnne Akalaitis said that "chaos, not conflict, is the essence of drama." I take that literally as I do a lot of things. I enjoy the elements Akalaitis identifies: the illogical, the disruptive, the disturbing, and the reckless. Visually, I like messes. I like the juxtaposition of things that surprisingly go together. I have always been intimidated by visual art. But I’m pushing myself to be uncomfortable and try things, and forget the standards I agreed to at some point. Attached is a sketch I made on Evernote showing the difference between chaos and conflict.